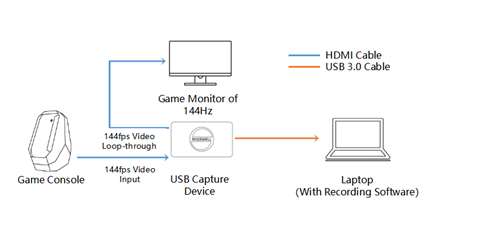 In the recent years online gaming has become very popular all over the world. Many gamers pair a monitor, having at least 144Hz refresh rate with games that support 144fps or higher frame rate in the hope to achieve zero latency delay. However, 144fps is a high signal source and forms an obstacle for many players that want to record their content. The typical encoders or capture cards cannot handle 144fps signal sources well. In the following blog we will provide a solution to this issue and explain how to use Magewell capture devices to capture and record 1080p 144fps game video signals.

2. While on the gaming system, open graphics card control panel (for a gaming computer) or video settings panel (for a game console). Now set the resolution at 1920x1080p and the output refresh rate at 144Hz (The frame rate of the output video signal will be 144fps).

3. What you do now is open the recording software, choose the Magewell capture device and start recording the game.

live streaming platforms usually have limits for frame rate. For instance, the highest streaming frame of YouTube, Twitch and Facebook Live is 60fps. It cannot be guaranteed that viewers have a monitor supporting 144Hz refresh rate when a player chooses to upload a 144fps recorded video clip to the platform. Magewell capture solutions feature FPGA-based processing for scaling video resolution and frame rate, which minimizes the processing impact on the host computer CPU while providing a reliable, stable, and cost-effective capture solution.

if users need to transmit 144fps game screens for eSports production efficiently, Magewell's Pro Convert HDMI 4K Plus NDI encoder is highly recommended for personal recording requirements. NDI is a protocol for high-quality video-over-IP transport introduced by NewTek. Magewell integrated this technology in many models of the Pro Convert hardware family, which can help users achieve low-latency video transmission regardless of physical distance and is compatible with 1920x1080p 144fps sources. There are many software and hardware live production products that support NDI decoding, including vMix, StreamStar, NewTek TriCaster, Watchout and our own Pro Convert decoders.