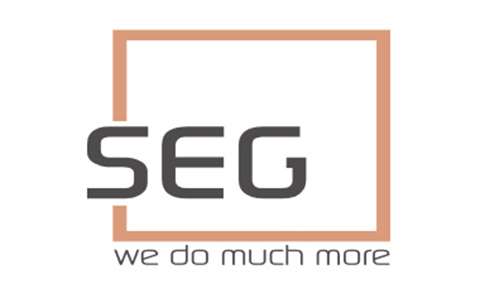 Headquartered in Sofia, Bulgaria with a satellite office in Vienna, SEG – formerly known as Special Events Group – is a leading provider of specialized services for the event industry in Bulgaria and Austria. With a mantra of "We Do Much More," the company offers a broad portfolio of event services including technical equipment; set and stage design; concept creation; furniture and décor rental; systems integration and event equipment sales. SEG also owns the Sofia Event Center, the most advanced location for events in the city.

With over 100 personnel, SEG has worked on more than 30,000 events since its founding in 2001 for top-tier clients including Amgen, CPX 360, Herbalife and Novo Nordisk, and continues to handle over 2000 projects each year. In 2016, the group expanded to include a systems integration and sales arm, Syntegra Partners, that leverages SEG's extensive technical and market experience to supply proven solutions for end-customers' ongoing needs.

For its event rental projects, SEG provides both the technology and the crew to operate it. The company first investigated Magewell products when searching for plug-and-play solutions to reliably bring live SDI or HDMI video and audio feeds into streaming or projection mapping software on their laptops.

"With some other vendors' products that we have used, they're fine once you've configured them as long as you leave them set up and don't touch them," said Eng. Nikolay Kachamakov, CTO of SEG and CEO of Syntegra Partners. "But with the majority of our projects outside our own venue in other people's buildings, my team are travelling a lot around Europe and very frequently setting up on-site in a short timeframe. They don't have time to reconfigure a product every time, every couple of days. We needed something truly plug and play."

SEG's array of Magewell capture devices bring SDI or HDMI signals into their laptops via USB 3.0 for use with live presentation and projection mapping software including Dataton WATCHOUT and Resolume Arena, as well as streaming to CDNs and social media platforms such as YouTube Live and Facebook Live. SEG prefers the robustness of SDI signal transport, using HDMI only when SDI isn't possible because of customer-provided equipment or venue infrastructure considerations.


From their first all-in-one boxes to the newer USB Capture models, SEG found Magewell's devices to be much easier to use and more reliable than the alternatives they had tried. "Magewell devices were the first ones we used that were truly just plug-and-play, whether on a Mac or Windows system, and stable," said Kachamakov. "They're simply plug-and-go, with no setup required, and their ability to auto-sense the input format means we don't even need to worry about configuring the resolution if we're using a different camera or format.”

Kachamakov also noted that the Magewell devices' cost-effective price point provides excellent return on investment (ROI), while from a technical perspective their built-in, FPGA-based video processing is important for taking the computational load off the CPU on their laptops.

SEG's success with Magewell solutions in their field productions has led them to also begin offering the products to their systems integration clients. "Our systems integration group, Syntegra Partners, resells solutions that have been proven in the field as part of our daily rental and production business," said Kachamakov. "Based on our own great experience with the Magewell devices, Syntegra proposes and sells them for projects such as Zoom Rooms implementations, Skype collaboration, streaming applications and lecture capture installations.”

SEG is also developing a roadmap for implementing IP-based media transport based on the NDI® protocol (developed by NewTek) in their rental projects, with Magewell again poised to be part of that plan. "As CTO, I see network-based transport as providing exceptional flexibility and other advantages," Kachamakov explained. "We can easily go into a third-party venue or corporate building that already has robust CAT6 infrastructure and leverage it rather than pulling our own cables. We have lots of SDI cameras, though, so using Magewell's Pro Convert SDI to NDI converters will allow us to keep using those cameras without pulling hundreds of metres of SDI each time.”

While NDI is on the horizon for the future, Magewell's USB capture devices continue to deliver valuable benefits to SEG in the present. "For me, the important thing is that with Magewell I have devices in our rental fleet that, no matter what I need, I never worry about the video capture – I just plug them in and go," summarized Kachamakov. "I don't need to take care of getting the capture working, it's plug-and-play, so I can just focus on the many other tasks that go into each event.”